GSG brings together leaders for impact investing from around the world

by admin_eldomo in VIVA Idea

“The heart next to the invisible hand” is impact investing, says GSG founder Sir Ronald Cohen.

“The time is now,” was the main message that organizations from around the world delivered at the Global Steering Group for Impact Investment (GSG) Leadership Meeting, as it is known around the world.

The meeting held in Turin, Italy, brought together more than 30 leaders of the impact investing ecosystem from around the world, who are looking at how to drive and transition to impact economies.

The meeting held in Turin, Italy, May 23-25, brought together more than 150 leaders from business, finance, government, academia and organizations from around the world looking at how to drive and transition to impact economies. One of the main topics was impact finance and impact investment, which can play a central and strategic role in the development of countries.

An impact investment is one that generates returns for investors while bringing concrete and measurable benefits to society and the planet. Discussions, workshops and talks covered the topics of mobilizing capital for impact; impact in emerging economies; green and social solutions for a just transition; and impact harmonization and transparency.

For Shannon Music, director of VIVA Idea and president of the Central American Impact Investment Platform (PiiC) how to promote capital towards impact investment in emerging markets and on the measurement, harmonization and transparency of impact standards”.

The director of VIVA Idea who participated in Turin, who is also a member of the board of directors of CINDE in Costa Rica, these are issues that matter more and more, since, both at the public and private level, “it is increasingly necessary an investment that considers the positive impact on societies and the environment as part of the return, in addition to its measurement”.

Paola Fonseca, VIVA Idea’s Director of Impact, presented the work proposal developed by VIVA Idea towards a common agenda among the six Latin American organizations representing the GSG (Mexico, Central America as a region, Colombia, Brazil, Argentina-Uruguay and Chile), to promote impact investment in our region and strengthen the ecosystem. 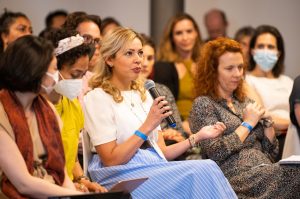 For Fonseca, “the alignment of actors that we propose with the methodology that we have developed in VIVA Idea will help us meet the objectives that we as a region can propose and strengthen our partnerships and thus also strengthen the impact of each of the representations in Latin America,” said Fonseca.

In Latin America, the counterparts of the GSG are the National Advisory Boards present in several countries that work to promote and channel impact investment. These national or regional spaces, such as the iiCP, seek to echo, facilitate and lead the global trend towards investments with benefits for the people of Latin America.

According to the GSG, the money allocated to investment worldwide is enough to finance the Sustainable Development Goals and to alleviate poverty around the world. GSG promotes the idea that there is no longer a trade-off between “doing good” and “doing well” and believes that the core of impact investing is the establishment of measurable impact objectives and financial performance management.

One of the consensuses at the GSG is that the world faces growing inequality and the spread of social problems such as lack of access to basic education and healthcare, as well as climate change and the refugee crisis. These challenges can be addressed by unleashing the twin powers of impact capital and social entrepreneurship, which means that problems can be tackled at scale and with the help of capital markets.

The forum “A New Era of Impact”, which was opened by GSG Chairman Sir Ronald Cohen, was also held within this framework. The forum sought to encourage leaders in the impact investment ecosystem to promote the evolution of social impact in both public policy and the private sector in order to catalyze a new economic model for the benefit of all people, not just investors.

“For the first time we see an invisible heart guiding the invisible hand, that heart is impact,” said Ronald Cohen, director of the Global Steering Group for Impact Investment (GSG),

The global impact investment ecosystem proposes the idea of creating a capital market focused on supporting companies that intentionally, additionally and measurably achieve positive social and environmental impact. Companies that leave positive elements in the territory, beyond economic benefits, could access this capital to grow. In this way, transactions would be based not only on financial value but also on the value of social impact achieved and measured, and would become a driver for positive systemic change.

The Global Steering Group for Impact Investing (GSG), of which VIVA Idea is a member as coordinator of its Central American chapter, is an independent global steering group that brings together leaders from the worlds of finance, business and philanthropy and aims to catalyze impact investing and entrepreneurship to benefit people and the planet.